This trumpet was purchased in London, England in 1951. It has been very useful for me. I used this trumpet to gain a bursary at the Royal Academy of Music. When asked what I would play, I suggested “The Trumpet Shall Sound” from the Messiah by G.F. Handel. This was found to be acceptable, and after playing some few minutes, I was told that I would be informed of the results, which I received a few days later.

I was asked to attend all orchestral rehearsals and performances, and in return I would have lessons with George Eskdale, the  principal trumpet player of the London Symphony Orchestra. Mr. Eskdale was a hard task master and not very accepting of errors of any kind; he was a man with little patience if lessons were not very well prepared. My particular inadequacies were discovered in a short space and I was set on a program of studies which would bring me up to scratch. At the same time I was making some kind of a living in London, notably certain on- and off-­stage playing at the Royal Opera House (Covent Garden) and also band work with the Band of the Irish Guards, a busy musical unit, which at that time in history was exceptionally active with public duties and performances (Royal and otherwise) in London and elsewhere. My preparation for lessons suffered a little, and Mr. Eskdale was not very happy!

Using this D trumpet, I had opportunities to become acquainted with some of the music of the 17th and 18th century, notably Handel, Purcell, Bach, etc. In 1953 I was asked to take part in a performance of the Messiah. The request told me to get on the train to Windsor, and I would be met there along with a few other musicians and taken by car to a rehearsal at the Royal Chapel of All Saints (Windsor Great Park). There we met the soloists and the small choir of St. George’s Chapel (Windsor Castle). The four soloists were well-known singers who had been invited to this special performance given to the members of the Royal Family, along with those few people who squeezed into the small chapel. Singer’s names: Isobel Baillie, soprano; Kathleen Ferrier, contralto; William Herbert, tenor; and Owen Brannigan, bass. No musicians or soloists were paid except for a small sum covering travel expenses. Of the Royal Family attending: HM Queen Elizabeth, The Queen Mother and Princess Margaret. No male members were there. The Royal Ladies met with the soloists in the small office at the chapel, and made comments about the music and performance.

Other interesting facts about this trumpet:

In 1960 the Bach Society of Toronto decided to fund a scholarship for a trumpet player to devote study to the trumpet music of the baroque period and in particular the music of Bach. The scholarship was advertised in the local press and held auditions thereafter. It was a disappointment to the Society that very few applicants were interested in taking on this opportunity. Toronto was a busy city for musicians at that time, and no one wished to spend the time and effort to specialize in this field. Only four players turned up for the audition held at the Canadian Music Centre. A small group from the Toronto Bach Society listened to the trials, and after listening to Bach Cantata 51, were left to make a decision, which was announced a few days later. I was fortunate in gaining the scholarship, and a short time later had a final audition with Glen Gould at the Royal Conservatory of Music. It all went well, and I was presented with a cheque of $1000.00 a few weeks later. Monies were obtained from the Canada Council. I had decided that if I won the scholarship I would take studies with Armando Ghitalla of the Boston Symphony Orchestra, so I made arrangements to start lessons with him in Boston. Also we, my wife and I, had decided to leave from the RCAF Band without delay. Unfortunately the Toronto Bach Society became financially embarrassed and ceased their program of concerts of music of the 17th and 18th centuries. It took some time to establish myself as a competent baroque player in Toronto, but I did play in many performances in Toronto, gradually establishing a reputation of being a “safe” Bach trumpet player, mostly playing in many church concerts and at the Stratford Festival, beginning with a wonderful all-Bach concert with Glen Gould and Lois Marshal (Cantata 51, Bach). 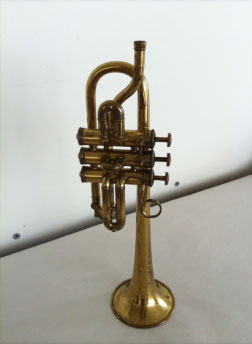 This trumpet was one of the first piccolo trumpets in F, which many players have used for performances of the Bach Second Brandenburg Concerto. I purchased this when in London, around 1960. I had begun having lessons from George Eskdale at the Royal Academy of Music (on a bursary), and having listened to the recording of this piece by the Busch Chamber Players with Mr. Eskdale playing the trumpet part, I was anxious to talk to him about this and perhaps have a lesson or two on it. I brought the trumpet with me for a lesson and expected some encouragement, but he took one look at the instrument and grumbled and set me down to do so many things in which I was deficient. The unspoken word was that I had many years ahead of me before thinking about the playing of small instruments and in particular the music of the baroque period. Many years later I had acquired the ability to perform the extreme high register needed to perform most of the repertoire, and in fact played the Brandenburg No. 2 many time here in Canada, not using the F trumpet but the Martin Piccolo trumpet in B♭.

The manager of Boosey and Hawkes (B & H) in Toronto had attended the Frankfurt Instrumental Fair in 1961 (I think) and had been interested in a new trumpet that had the use of rotary ventils instead of the normal pistons. He brought this trumpet back to Canada, and asked me to try it and give him an appreciation of the instrument. The trumpet is pitched in C, which may have been a mistake, as it would perhaps have been better in B♭. The stroke for the ventils was very short and seemed to be very positive, except that there was a feeling of “sag” due to the stringing of the mechanism. It is generally agreed that the rotary valve is very responsive and accurate. My conclusion was that the instrument would not be readily accepted by most orchestral trumpet players here in North America. I wrote a short note concerning this, and gave the trumpet back to B & H. As it turned out, B & H had no use for it and it was given to me; in fact, they kindly lacquered it for me.

This trumpet was designed by a friend, Bruce Holcomb, who was very interested in all things pertaining to the designing of brass instruments. Bruce had recently graduated with a B. Mus. degree from the Eastman School of Music, and had enlisted in a Canadian band in preference to one of the USA bands. He had spent some time in West Germany looking at and researching early brass instruments found in well-known German museums. He found a baroque trumpet in Ruck Museum and from that, designed this trumpet, which is modernized to have three rotary ventils, giving the possibility of playing the instrument in tune. It is of course an experimental trumpet useful in gaining some knowledge and experience of dealing with the length of the Baroque trumpet.

I had shown this to Amando Ghitalla when I was visiting in Boston. With the busy and exacting life of a member of the Boston Symphony Orchestra (BSO), he showed little interest in the early instrument. In 1961, I had a phone call from a member of the Telemann Society of New York asking if I would be interested in taking part in a recording of the Handel Fireworks Music in New York. I discovered later that the group of musicians to record this music were members of the BSO and New York Philharmonic Orchestras, and the recording was to be played on Baroque instruments. The BSO were in New York for one of their concerts, and the time would be ideal to get the players together and record the Handel piece. It was a gathering of musicians who were keen about early music but played on 17th century instruments on which they had little experience or skills. The idea was that we would play each section at least twice – no rehearsal at all – and the tape would be running at all times! The instrumentation was odd and consisted of the following: three natural trumpets, three hunting horns, several oboes playing on reeds that would give the effect of early instruments, an ophicleide, military drums and at least one or two bassoons. Little attempt was made to have a semblance of intonation/tuning. Well after a long session at the recording studio we went back to the hotel thoroughly weary, but with the thought that this was one recording that would not be released, and congratulated each other that it was so bad that we could rest assured that it was a futile exercise. A few months later I was told that this recording had been released with the proviso that one should play side B first because there was an explanation that this performance would display the poor tuning and intonation that was the norm in those days!

I asked Mundy Ghitalla about the E♭ trumpet he had used for a recording of a concerto by J. G. Albrectsberger in E♭. He suggested, and in fact chose for me, a Martin trumpet of the same size and bore that he had used on that particular recording. I have found it useful for playing with chamber-size groups, but used a larger bore E♭ trumpet for other concertos, Haydn, etc. 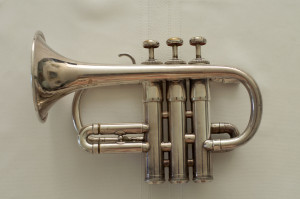 Martin Piccolo Trumpet in A and B♭

An interesting story about this trumpet: I had discussed with Mundy the choice of piccolo trumpets, and he suggested that I buy a Martin in A/B♭. He had one he would send to me, and sent it from his home in Boston to my home in Toronto. When the instrument arrived by mail, I was instructed by Canadian Customs to visit them to discuss dues owing. They gave me two options: pay up, or send it back to the owner, which I did, having warned Mundy that the instrument had become too expensive with duties to pay. A few weeks elapsed, and then I received a cardboard box that stated that it contained an English tea pot, so no duty was required. On opening the box I found the Martin piccolo trumpet in excellent condition, and have used this instrument so many times mostly for music by Bach, Telemann and Scarlatti. It is an excellent trumpet for my kind of playing, with a very small bore that would not be the choice of many players. It allowed me to play on my standard mouthpiece (Bach 1½ C). It worked for me but I think it not to be an orchestral instrument, where huge forces are called into play.

These trumpets have now found a home at the University of Ottawa School of Music.