While Bob was quite willing to talk about his life outside music, he was happy to enjoy a private life with his wife, Marion, his three daughters – Susan, Jennifer, and Valerie – and eventually, a much larger extended family. What all who knew him can agree on is that he loved learning new things and mastering challenges, and always with a generous, respectful spirit. 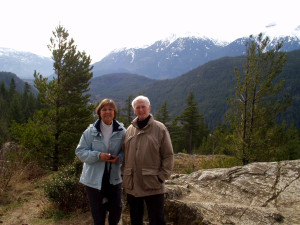 Marion understood the life of a musician, having sung in the Luton Girls Choir, and later in Toronto’s Palmer Singers and St. Clement’s Anglican Church Choir. In Ottawa, she was active as a volunteer with Girl Guides of  Canada (as a mother of three girls, let’s not forget!), Friends of the National Arts Centre Orchestra, St. Matthias’ Anglican Church, and The Ottawa Regional Cancer Clinic. She loved to entertain, and brought humour to Bob’s life that was evident whenever she was chatting after one of his concerts. It was amusing seeing her chide Bob about “his beloved university”, while at the same time supporting his endeavours there well into his retirement. In the midst of her busy family life, Marion battled cancer, twice, and eventually succumbed to the illness in October of 2007 at the age of 71. Bob and Marion had been married 54 years. While he lived the remaining years of his life with his trademark enthusiasm and dignity, there is no doubt that Bob missed Marion deeply.

Those of us who knew Bob through music were often unaware of all the other interests he pursued with his family. One of these was cycling. Bob and Marion became well-known in Ottawa’s cycling community, as members of Ottawa Bicycle Club, and co-founders of the Rideau Lakes Cycling Tour. It was a common site at the university to see Bob, in his shorts, about to run or cycle home. He did this well into his so-called retirement.

On the drive up to Domaine Forget, he could point out spots where he had camped with Marion and the girls, using a converted camper-van. He was struck by the beauty of Canada, and was always keen to explore.

When he was relaxing, he appreciated a good sherry and simple cooking that allowed more time for conversation than preparation. He and Marion were interested in natural, unadulterated foods well before it became commonplace to examine food closely.

Underpinning Bob’s life was his faith, which he expressed through his involvement with St. Matthias’ Anglican Church. He lived according to his motto – “Be good, do good.”